skip to main | skip to sidebar

Ages 7-8: The theme of these classes was basically God is One... one light, many lamps. we also sang the song, "Noah, Abraham, Krishna".

Crafts: We got the templates from a Baha'i Activity book, the kids coloured them and put them together themselves. 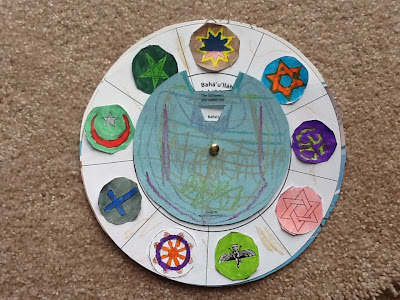 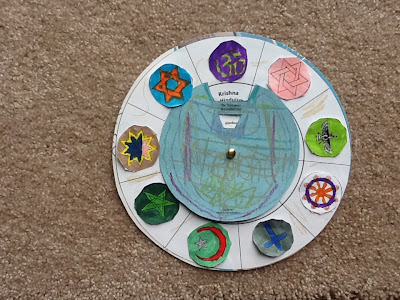 The circle craft rotates around through the various symbols of the religious, and matches them with the names of their Manifestation, and also matches up with what their followers are called. 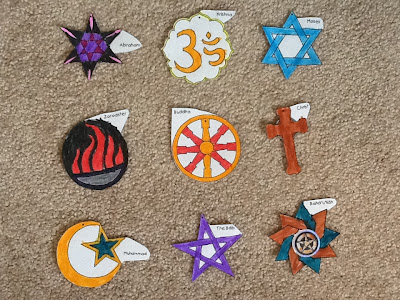 The separately coloured and cut-out symbols are meant to be put together in a mobile, hung from a stick or a kind of hanger.

This week one of our children chose MODERATION as our virtue to concentrate on. An interesting choice from a child, we thought, but hey, we can all use some learning about moderation!

STORY: Sarah told the story about how, in 1912, while members of the Baha'i Community were contributing funds towards the building of the Baha'i House of Worship in Wilmette, Illinois (the first and only Baha'i temple in North America at the moment), a woman made a rash decision in order to contribute money to this cause. She cut off her hair and sold it, then she gave the money to the temple fund. But when she told 'Abdu'l-Baha that this was what she had done, 'Abdu'l-Baha told her that, had he known that she was planning to do this in order to contribute to the temple, he would have told her not to do it.

This story comes from the early 20th century, when North American woman kept their hair long. Prior to 1913, women's hair was piled high atop the head and thickly padded. Notice the thick hair beneath the large hat in the picture. It was viewed by the culture (both men and women) as 'extreme' and completely unacceptable for a woman to cut her hair short. Of course this changed over the years, and so now we just need to understand the historical context of 'Abdu'l-Baha's comment. But the message of the story is still clear: moderation in all things.

The kids briefly discussed what needed moderation in their lives: watching TV, eating sweets, playing video games. They totally got it without much prompting.

MUSIC: Today, instead of learning a song about moderation (because we couldn't think of any!) we learned the musical term, "moderato" (moderate speed) and then compared it to the terms "presto" (fast) and "lento" (slow). We played rhythms with our hands, changing tempos between these three terms, depending on which one was shouted as a direction.

CRAFT: Our craft was to each create a picture of things in our lives that may require moderation - we ended up with pictures of all kinds of things anyway. The kids glued a candy onto the picture as a reminder of our discussion about moderation, and then we went outside for a service project.

SERVICE PROJECT: Today was a bit unusual in that there had been a lot of trash (hamburger wrappers, straws, cups etc) along the edge of the lawns on our side of the block. We decided to take the kids outside with tongs and a garbage bag and they had a ball finding trash and picking it up. We went down the block to the bus stop, and when we were done we looked up the street and saw how beautiful it looked once again with no trash littered along it. The kids had a lot of fun with this, it was a bit like a treasure hunt!

Taking a break for the summer

We have taken a break for the summer and will be starting up again in September - our classes are for 7-8 year olds. Weekly classes will be on Saturdays (exact time tba), and we hope that everyone will still be able to make it and to enjoy each other's company each week. We have also moved house, so please email me for our new address and phone number. Although this poster is from children's classes in New York City, it describes what all Baha'i Children's Classes are about. For more explanation, you can also go to the very first post on this blog.

Hope to see you all there,
Amy
Email: stephamy@gmail.com
www.bahai.org
Posted by Amy at 12:44 PM

Trustworthiness Feb. 7 - What Happened in Class?

Today we focused on the virtue of Trustworthiness.

We told a great story about a littl e boy who was in a class that was working on calligraphy, and 'Abdu'l-Baha was taking the time to look at all of the children's work every week. 'Abdu'l-Baha would comment on the work always in an encouraging way, praising the children, and offering any help if the children needed any. The little boy in the story created some beautiful calligraphy one week, and when he showed it to 'Abdu'l-Baha, 'Abdu'l-Baha saw how beautiful it was and he praised the little boy's work and wrote a comment on it (something like, "Excellent work!"). The boy was so proud and happy that 'Abdu'l-Baha had praised his work. The next week, however, the boy realized at the end of the week that he didn't have a good quality calligraphy done to show 'Abdu'l-Baha. So instead of showing him his real work for the week, the boy took the calligraphy that 'Abdu'l-Baha had already praised the week before, tore off the comment that 'Abdu'l-Baha had written, and showed exactly the same work to 'Abdu'l-Baha. When 'Abdu'l-Baha saw the work, he said kindly, "That work looks familiar," and handed the work back to the boy without any praise, without any written comment. The boy realized that he had lost 'Abdu'l-Baha's trust by trying to trick him, and after that he never tried doing something like that again.

The kids enjoyed the story, and understood the meaning of it. Then we read a storybook called "The Big, Fat, Enormous Lie" by Marjorie Weinmen Sharmat (Unicorn Paperback). The kids really liked the story. 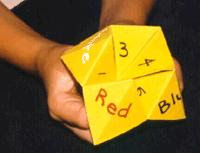 Because we started class quite late today, we skipped the music went straight to the craft, which was making "fortune tellers" - those paper triangle-folded games that you ask questions and then the paper reveals an answer. A sort of "searching for truth" game, however we knew it wasn't a trustworthy source to ask!
Posted by Amy at 4:09 PM

Truthfulness Reflection - What Happened in Class?

Today our virtue was Truthfulness.

Story: We told the story of the Boy Who Cried Wolf, and it was told with extra emphasis (to keep it interesting!) as the kids shouted out "super silly sheep!" every time they were pointed to. This story is easily understood by kids and our kids were no exception. We introduced the quote from Baha'i Writings: "Truthfulness is the foundation of all human virtue." We discussed the meaning of the word "foundation", and then the meaning of "virtue", because understanding these words is key to really understanding the whole quote. The kids memorized this quote.

Music: We reviewed "Doh-Re-Mi" with the hand signs and added "Fa" and "Sol". We learned that "Doh" is the foundation of the music, and then sang the word "Truthfulness" as we signed "Doh". Then we added the words "hu-man vir-tues" on the notes "Mi" and "Re" and ended with the words "super silly sheep" (just because they are so fun to say!) on "Sol". We did this a few times until we had it learned vocally, and then transferred it onto instruments. We think it helped solidify remembering the quote, but definitely that would be reinforced much better by the craft. 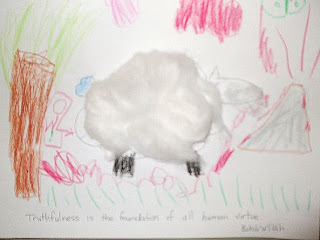 Craft: We decided at the last minute to make sheep pictures - we drew a sheep outline onto a blank piece of paper for each kid, and then gave them cotton balls to glue onto the picture to make a wooly sheep. The kids added faces and landscapes etc to the pictures and they were lovely! At the bottom of the picture we wrote the quote about truthfulness, and the kids took the pictures home with them. Pictures of these sheep are forthcoming, as soon as I can figure out how to get the pics off of my phone (forgot the camera today!)
Posted by Amy at 3:38 PM

This week our focus is on the virtue of Truthfulness.

Story: We will tell the story of "The Boy Who Cried Wolf" which really illustrates well for children the importance of truthfulness. 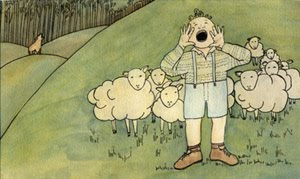 Music: We will sing "Truthfulness is the Foundation of all Human Virtues" while accompanying it rhythmically on the instruments and xylophone. Then we will continue with reading rhythms and learning solfege (Do-Re-Mi etc).

What happened in class?

Story: Today we had five kids ages 5-7, and the theme of our class was Friendliness. We read a book to the kids called "I'm a Good Friend" by David Parker (Scholastic). We had a great discussion about friendliness as well as unfriendliness. We brought in a quote from the Baha'i Writings: "Blessed is he who mingleth with all men in a spirit of utmost kindliness and love." We discussed the meaning of "mingleth" just to be clear, and also we clarified that "men" refers to "humans" (not just men!).

Music: We learned the song "Hello World" by Red Grammer, and we learned the sign language for it as well. Then we made a rain storm on hand drums, using dynamics. 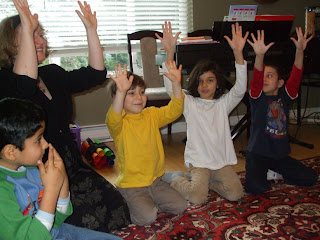 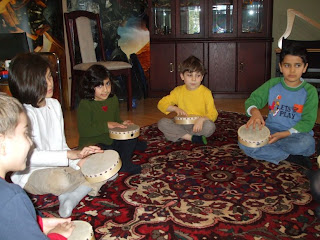 Making a sonic rainstorm
Craft: We made friendship bracelets out of beads and pipe cleaners and planned to give them to a friend.
Posted by Amy at 3:53 PM